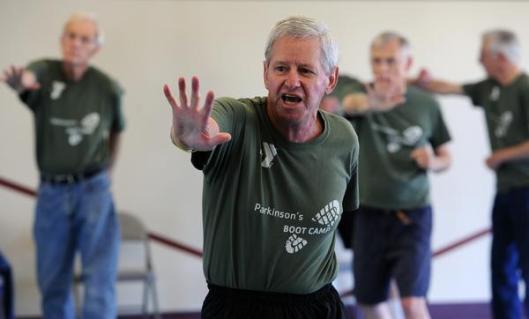 Parkinson’s disease (PD) is chronic movement disorder that progresses and worsens as time goes by and affects over 10 million people worldwide. There is no cure for this debilitating condition and there aren’t any solid, specific conclusions as to what causes PD.1 A few of the more notable personalities that have been challenged by PD are actor Michael J. Fox, singer Linda Ronstadt, and former Attorney General Janet Reno who succumbed to the disease in 2016. PD usually affects persons over 40 to seniors, but there are many cases of younger persons developing this disease as early as age six. Despite no cure, medicine and surgical procedures have been used to relieve some of the symptoms of PD which include: involuntary movement (tremors in limbs at rest), muscle stiffness, poor balance, trouble standing, impaired voice, anxiety, depression and dementia.2 Another approach used to relieve some of the symptoms of PD is practicing aerobic and learning-based exercises.3

Though research is ongoing, some promise has been shown in Parkinson’s patients who participate in both aerobic and learning-based exercises, and some doctors are prescribing exercise as a treatment to help with balance, posture, muscle stiffness, rhythmic movements, heart and lung function, and depression. Some aerobic exercises that are recommended can include walking, dancing, yoga, and classes that require shifts in movement, direction, and rotation. When it comes to learning-based exercises, it is really important to include exercises that challenge tempo, activity and direction, also known as “random practice” exercises.

Helen Kollias, PhD, a molecular exercise physiologist based in Toronto, notes in her article “Physical Activity and Parkinson’s Disease” that studies have found that people with PD who exercise have improved strength, cardiovascular fitness, balance, flexibility and gait.4 It is cautioned that starting an exercise program for those with PD depends on factors such as age and the progression of the disease. Before starting any new exercise regimen, PD patients should discuss the details with their physician. Once cleared by a doctor, the average exercise recommendation for those with PD is very similar to those without the disease, as long as they showing a heart rate at 70-80% maximum beats per minute. The age-based formula for calculating estimated maximum heartrate is 220 minus your age. Patients should strive for four to five times a week, exercising 30 to 40 minutes per session.3

“There is some very strong evidence, both anecdotal and researched (present in peer-reviewed journals), that shows exercise in general assists with symptoms and slowing progression of Parkinson’s Disease,” according to Yusuf Saleeby, MD, Founder and Director of Carolina Holistic (Priority Health, LLC), 20-year (retired) Emergency Medicine practitioner. “It is more difficult to show what types of exercise (aerobic vs. resistance training) is more effective, but there is a movement towards use of martial arts as a way to stave off the severity of the movement disorder,” notes Saleeby.

As mentioned earlier, learning-based exercises, especially those considered “random practice” exercises can help PD patients with mobility, balance, posture, and help reduce muscle stiffness. Individuals with PD become more cognitively engaged with the practice and learning of movements and skills that were previously done automatically without thinking. Studies suggest that aerobic exercise, may have a role in the improvement of behavioral function in clients with PD. Exercises that incorporate goal-based training and aerobic activity have the potential to improve both cognitive and automatic components of motor control in individuals with mild to moderate PD through experience-dependent neuroplasticity, or creating normal behaviors through introduction of outside stimuli .9

Because the exercises in certain martial arts programs require shifts in tempo, direction and rotation, this may be just what the doctor ordered! “Vigorous and frequent exercise, such as non-contact kickboxing is encouraged among those with PD, especially the younger individuals as it has been shown to increase flexibility, increase mobility and decrease falls,” according to Saleeby. There is also evidence supporting that, in PD’s early stages clients can learn new motor skills. In a study, subjects with PD repeatedly practiced a series of rapid arm-reaching tasks with different levels of movement complexity over several days. Fast performance of sequential targeting tasks improved with practice in both groups and was retained over 48 hours.8

It is recommended, the PD clients exercise on a consistent basis. Those with PD enrolled in exercise programs longer than six months, regardless of intensity, have shown significant gains in functional balance and mobility as compared to programs of only two-week or 10-week durations.6

According to the stage your PD client is in, they may need assistance. Encourage them to bring a friend or family member along with them to work the martial arts class also. Working with a partner can be a motivational tool to help make working seem less like work and more fun. A partner can offer just the right amount of encouragement to someone who may feel less confident and more self-conscious.

It’s Not a New Concept

The idea that martial arts-related programs could help those with PD is not new by any means. Seventeen years ago, researchers at Emory and Georgia Tech studied the effects of Tai Chi and Qi Gong on Parkinson’s patients. The goal was to find out if these mind-body modalities can actually improve the quality of life of Parkinson’s sufferers by helping them “train their minds to train their bodies.”  Steven Wolf, professor of rehabilitation medicine at Emory, was the primary investigator in the 2001 study and concluded that PD patients performing Qi Gong showed improvement in gait and balance. In an earlier study in 1994, Wolf noted that older persons who took classes in Tai Chi had less falls. 7

It’s true that we have a long way to go when it comes to slowing the symptoms, and eventually finding a cure for the debilitating disease of Parkinson’s. But, it is encouraging to see studies that show that exercise can help and, that even exercise of a vigorous nature such as the short “rounds” of intense MMA-style moves found in some workouts can help relieve some of the symptoms of PD. Remember, not every person with PD is at the same level, and a doctor needs to chime in on the specific exercise needs of a client. Also, partnering up with someone who can offer support, encouragement and motivation, can be just what your client needs to help keep them focused and coming back to your classes for more!