Showing the true meaning of running for your life

Many of us have faced difficult challenges in our lives and may have found ourselves running away from them. After a few years down that same road, Toby Estler found that running can be a great way to help bring renewed focus to one’s life and motivate us to handle our problems in a more positive manner—changing “running from” life to “running to” life.

Born in England, Estler spent a lot of time running from various situations in his life. Defending causes he believed strongly about, he found himself running from the police. Estler would run ahead of fox hunters on their horses trying to throw off the scent of their prey. But, he also ran away from himself, his responsibilities and his life. Estler battled drugs, alcohol and smoking addictions and had a marriage that was falling apart. Then a big turning point came when he found himself behind bars at London’s infamous Wormwood Scrubs prison for a demonstration he participated in. During his three-month stay there, Estler crammed his head against the bars of the prison window to see the park beyond the prison wall. “I imagined myself free from my drab cell and out in that park running,” Estler says. “I knew it was time for a change in my life and I said to myself, ‘When I get out of here, I want to put my head on my pillow…knowing I have made the very most of that day that I could.’”

Months after his release in 1994, Estler immigrated to America and started anew in Long Beach, Calif. He wanted to keep his promise for a life change, but found that as a former 60-cigarette-a-day smoker and former addict, it would be difficult for him even to run a mile. Estler then found inspiration in the runner’s philosopher, Dr. George Sheehan, who wrote Going the Distance: One Man’s Journey to the End of His Life (Villard, 1996). Estler ran that mile and then he ran 5 miles, then 10—soon he was running his first marathon. “I found that I was no longer running from something, but I was running to something. I was running to the life I wanted,” says Estler, who was also able to salvage his broken marriage. “Addictions, broken promises, missed opportunities and bad habits have all been washed away in the sweat of a good run,” says Estler. 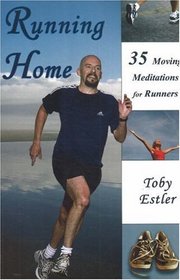 Now 43, Estler hopes his book, (Running Home: 35 Moving Meditations for Runners (Robert D. Reed Publishers, 2007), will inspire others to make positive life changes. Where does meditation come into play when it comes to running? Eslter explains, “Runners tend to relate to running faster or farther. With meditation you experience running deeper. It helps push through the emotional pain you might be experiencing and open up an inner experience.” Estler says that exercise in general is a great way to help channel energy and can also help those fighting addiction problems. “It is no secret. Numerous studies show that exercise stimulates neurotransmitters which elevate mood and reduce depression and anxiety. Get enough of them and you’ll experience what is known as a runner’s high,” Estler says.

Though he shares some intimate experiences and his book has a spiritual tone to it at times, Estler says anyone can benefit from it, even those who are not religious or not into running. “For some it may be walking, dancing, Rollerblading®, kayaking, yoga or even lawn bowling. Whatever your preference, a regular commitment to physical exercise offers a foundation for life transformation,” says Estler.

In addition to writing his book and running marathons, Estler also works as a personal coach for runners, a small business coach, and has made several appearances as a motivational public speaker. He is also involved in many fundraising efforts. In March, Estler ran in the Los Angeles Marathon and helped to raise $650,000 for the Leukemia and Lymphoma Society, and worked as a writer in a fundraising capacity for the UCLA Neuro-Oncology Unit to raise money for medical resources to help detect, treat and cure brain cancer.

As far as future ventures, Estler may challenge an ultramarathon but wants to continue to motivate others, spend quality time with his wife and daughter, and continue running to be the very best he can be.